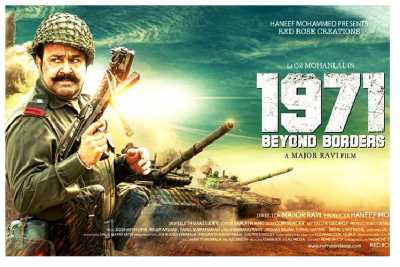 1971: Beyond Borders is a 2017 Indian war drama film written and directed by Major Ravi. It is the fourth instalment in the Major Mahadevan film series, with Mohanlal reprising his role as Colonel Mahadevan and an additional character of Major Sahadevan. It also features Arunoday Singh and Allu Sirish. The film, set in two time periods is based on the Indo-Pakistani War of 1971 and acts as a prequel as well as a follow-up to the series. Originally made in Malayalam language, the film was dubbed and released in Telugu as Yuddha Bhoomi. Mohanlal’s and Sirish’s characters were modelled on Hoshiar Singh and Arun Khetarpal, both of whom were awarded the Param Vir Chakra for their roles in the 1971 Indo-Pakistani War.

Openload – Only in Hindi