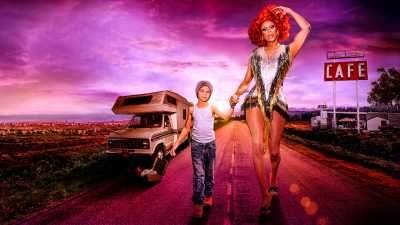 A down-on-her-luck drag queen played by RuPaul Charles. It’s bad in a variety of equally painful ways. It looks and feels chintzy. Its politics are loud, proud, and as simplistic as a child’s My First Read-Aloud book.

It has all the aesthetic and tonal hallmarks of a made-for-TV family movie from the early ’90s (on-the-nose voice-over, aggressively cloying score, obviousness), but spread across ten hours of a Netflix season. The acting is not great. It is bad.

The trickier and more curious question is whether AJ and the Queen knows itself for what it is.

There are elements of AJ and the Queen that seem blithely, deliriously unaware. Its inexcusable length, for instance, feels more like the result of being a Netflix show than anything essential to the project.

So much that happens is unnecessary beyond the point of absurdity, and most scenes feel inflated by at least 200 percent. The arc of the season is a 90-minute story at best, and watching Ruby and AJ go through the motions of Clorox-wiping a hotel room just to fill two more minutes of an episode is bad in a way that no intentionality could excuse.