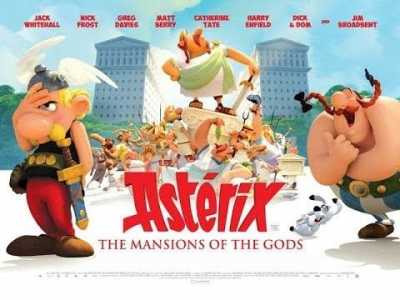 The French rework Goscinny and Uderzo at the same rate we do Dickens and Shakespeare. This here is not one of those Depardieu-as-Obelix live-action pantos. Rather, a distinctive, energised 3D animation, redubbed by a smattering of British comic talent.

The Gauls’ resistance against a looming Roman housing development allows writer-director Alexandre Astier to mock the processes of gentrification, while razzing all those recent Euro toons trying so desperately to be American. Where others have plumped for generic action,

Astier’s preference is for bathetic pauses and funny-eccentric jokes of scale. Even the English-language version’s vocal ensemble (Matt Berry, Dick and Dom, Jim Broadbent) proves a small triumph of out-of-the-box thinking, the sole quibble being with the casting of

Jack Whitehall as the title character: apparently even Asterix now has to sound like a public school alumnus. Still, there are gags enough for this not to matter unduly. Youthful newcomers and devotees alike will be chuckling early and often.