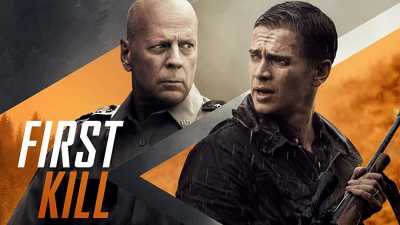 First Kill marks the third collaboration between director Steven C. Miller and Bruce Willis, but their efforts are not likely to enter the pantheon of such previous cinematic teams as Alfred Hitchcock and Jimmy Stewart or John Ford and John Wayne.

Produced by the aptly named Grindstone Entertainment, the film, much like its Miller/Willis predecessors Extraction and Marauders, is strictly grindhouse level, if grindhouses still existed. Their modern-day equivalent, VOD, will be the natural home for this mediocre thriller receiving a limited theatrical release.

As with most of his recent vehicles, Willis here plays a supporting part. Hayden Christensen plays the central role of Will, a hotshot investment banker whose importance is signaled in an early scene when he exasperatedly asks his assistant, “Did the meeting with the Saudis get moved to today?”