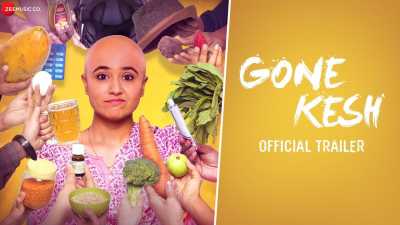 An unprecedented premise – the problem of hair loss and how it impacts a young girl and her parents – sets debutant Qasim Khallow’s Gone Kesh apart from the other small-town tales that Bollywood has churned out in recent times.

The film’s location – Siliguri in North Bengal – is no less surprising. Who would have ever expected an industry that never ventures beyond upcountry towns (Lucknow, Meerut, Allahabad, Varanasi, et al) to wend its way to the foothills of the Himalayas in the eastern part of India and set an entire film there?

Bolstered by terrific performances, not the least of which comes from Shweta Tripathi, playing a girl afflicted with alopecia, a condition that leads to complete baldness, Gone Kesh makes the most of its unconventional theme and delivers a story and a set of characters that are easy to relate to.

Not to say that everything about the 110-minute film is perfect – far from it – but it has an easy charm and innocence that sit pretty on a plot that could easily have lost its way had it opted for a more solemn tone.