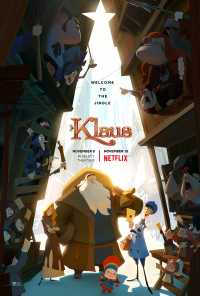 In a climate where most holiday stories have already been told and retold, Klaus, from Sergio Pablos (Despicable Me), stands out nicely as a unique and sweet original piece of Christmastime animation. For those looking for something new to show their kids this season

Getting banished to the distant Nordic town of Smeerenburg where his only way out is to get the townsfolk to send six thousand letters in a year’s time.

Old-timey Smeerenburg, however, is a forlorn frozen village that thrives on the hate between two warring clans – the Krums and the Ellingboes. All the dreary denizens do is viciously prank each other, as it’s tradition to lash out at one’s neighbor.

Jesper, who’s a huge pill in his own right, must now trick people into writing, and mailing, letters in order to win his freedom. It’s an interesting set-up – but not as crazy as where it all leads.