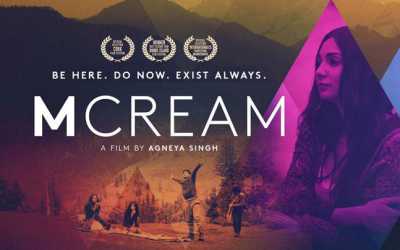 Agneya Singh’s M Cream is painfully boring. One wishes if there were a better, less offensive, classier and subtler way to say it, but sadly, a person would be hard-pressed to find words that could better explain the film than “painfully boring”.

It is a film about a gang of four young kids; Figs, Maggie, Jay and Niz; and their road trip and the myriad adventures they go… no, stop. They go through nothing. They have no adventure. What they do is smoke pot, have acid, and then go out looking for pot that is as good as acid, called

M Cream or Malana Cream. The thing with road trip films is that when people get into vibrant, physical adventures, all that makes for good visual cinema. However, visually, a bunch of guys smoking up gives nothing.

The bare minimum a scene about people getting high can give you is – a) People being stupid when they are high, and thus comedy or b) The world, all colourful, through their eyes, thus visual splendour.