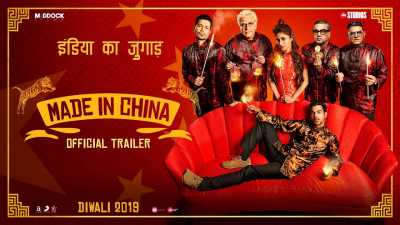 Made In China is symptomatic of what’s often happening in Bollywood right now. They have a concept driven by content that’s high on blending entertainment and message, and the idea is original, too. Yet the effort gets lost in execution, hampered by unsure storytelling.

Director Mikhil Musale’s Bollywood puts together two very different themes to set up the story. The first is sex and the Indian mindset – a domain that commercial Hindi filmmakers have been warily stepping into only in recent times, with films such as Vicky Donor

Shubh Mangal Saavdhan” and “Khandaani Shafakhana”. The second theme is good old entrepreneurship, and how nothing defines success in a business effort as a clever hard-sell pitch. This is an area Bollywood has tapped into abundantly in the past, with films such as Gurua, Rocket Singh: Salesman Of The Year, Band Baajaa Baaraat and Badmaash Company.

Clubbing the unrelated themes of sex and entrepreneurship could have been a sure shot USP if the writing was sharper, especially in the first half. The film wastes too much time before the post-interval hour finally salvages audience interest in what’s going on.