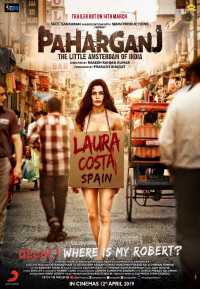 A rather hoary escapade into the by-lanes of Paharganj (also known as Shahganj or King’s ganj or market place during Mughal era) a neighbourhood of Central Delhi, located just west of the New Delhi Railway Station, this film narrates its story through the eyes of Laura Costa (Lorena Franco) a foreign tourist come down to New Delhi in search of her missing German boyfriend Robert.

She trundles through the by-lanes, following any and everyone named Robert, gets raped by an unscrupulous God-man and eventually goes to the police to file an FIR. The police though are busy trying to catch the killer of the Home Minister’s son,

Jitendra Tomar (Karan Soni) a basketball star who apparently had links with the drug mafia. Throw in a disillusioned basketball coach (Brijesh), his discontent wife (Neet) and some local thugs involved in a turf war and you get a rather distended crime thriller/whodunit?