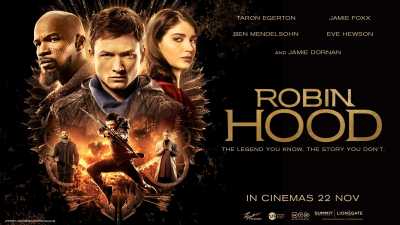 “Spoiled toff” Robin of Loxley (Taron Egerton) returns from the Third Crusade to find his manor ruined, his girlfriend Marian (Eve Hewson) with another man (Jamie Dornan), and Nottingham’s citizens bled dry by the Sheriff (Ben Mendelsohn). He becomes ‘The Hood’ to restore justice.

“Forget history,” we’re told during the opening narration of this latest attempt to reinvent one of England’s richest legends. “Forget what you think you know.” It feels like less of a demand than it does a plea. Because if you even start to think about Otto Bathurst’s Robin Hood in terms of historical viability, it crumbles quicker than a sandcastle in a rainstorm.

The Third Crusade of the late 12th century is portrayed as a kind of proto-Iraq War, with soldiers such as Taron Egerton’s Robin of Loxley waging urban, guerrilla warfare in breastplates that look like flak jackets. Nottingham, meanwhile, is recast as an industrial mining hellhole where fire constantly belches into the air — rather like 1919 Birmingham, which was stylishly recreated under Bathurst’s direction for the first three episodes of Peaky Blinders.