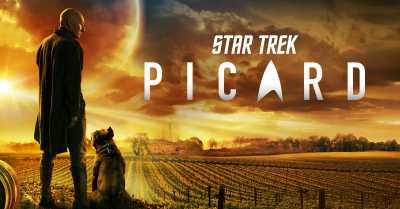 We are earthbound no more! Well, by the end this third episode of “Star Trek: Picard,” anyway. But throughout much of it, especially once Santiago Cabrera’s compelling new character, Rios, was introduced, it felt like this show was finally about to achieve warp velocity. And at the end, when Jean-Luc uttered his immortal catchphrase “Engage,” it felt like “Picard” had done just that.

There were still a few bumps in the road getting there, though.

“The End Is the Beginning” opened with a flashback 14 years earlier right after the synths had destroyed the Utopia Planitia shipyard and left Mars in flames. Picard has a pivotal meeting with a shaken Starfleet Command — they apparently, fearing for their greatly depleted resources after the attack

were so committed to calling off the rescue armada they had been going to send to Romulus that they were even willing to accept Picard’s resignation instead. The devastating news of the sudden end to his