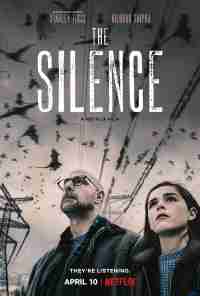 The Silence is a 2019 English-language horror film starring Kiernan Shipka and Stanley Tucci. It is directed by John R. Leonetti based on a screenplay by Carey Van Dyke and Shane Van Dyke that adapts the 2015 horror novel of the same name by Tim Lebbon. Netflix, which distributed the film, summarized, “When the world is under attack from terrifying creatures who hunt their human prey by sound, 16-year old Ally Andrews (Kiernan Shipka), who lost her hearing at 13, and her family seek refuge in a remote haven. But they discover a sinister cult who are eager to exploit Ally’s heightened senses.