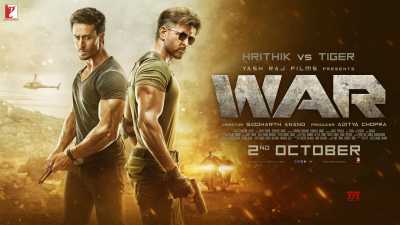 If we told you that the Hrithik Roshan-Tiger Shroff starrer War was actually directed by Abbas-Mustan, and not Siddharth Anand, you’d believe us by the end of the 2-hour-34-minute action thriller. Such are the twists and turns. A particular scene where Hrithik Roshan aka Kabir literally drives off an about-to-crash Army plane in a Jeep quite like Saif Ali Khan and John Abraham’s Race 2 makes it extra believable.

But then, it is no Abbas-Mustan film; it’s Aditya Chopra all the way. And quite frankly, the result of all the pent-up Dhoom 4 energy. We feel ya, Adi. We’re not complaining.

Kabir is the best agent India has, because when has Bollywood ever made a film about the second best? He reports to a rather paunchy Ashutosh Rana aka Colonel Luthra, who in turn reports to a Nirmala Sitharaman-looking Defence Minister. We meet Kabir at a point when he’s supposedly gone rogue killing highly placed India administrators, against orders, of course. Like in every other spy thriller Bollywood gives us.

The very next scene introduces us to Tiger aka Khalid, a promising young fellow, with dreams of making the nation and his Ammi proud in his squinty eyes. But with zero preparedness, he jumps into a room where, we’re told, a weapons’ deal is being hatched, in his white linen pants, a blue tee, no guns and the ugliest cell phone we’ve ever seen since Siemens C35. He, of course, beats them to a pulp, singlehandedly. And you know that, if nothing else, War is going to be paisa wasool.

After much persuasion from Rana, where he most likely yelled Sangharsh-style at least once, Kabir lets Khalid join his uber-secret team that’s about to set out on a mission to nab a ‘global terrorist’. No, we’re not taking names. But Kabir and Khalid have a bone: Kabir shot Khalid’s ‘gaddar’ father dead; can Khalid accept his father’s murderer as his boss? Yes, he can, if it’s about the watan and that right there, is what makes War a perfect Gandhi Jayanti release.